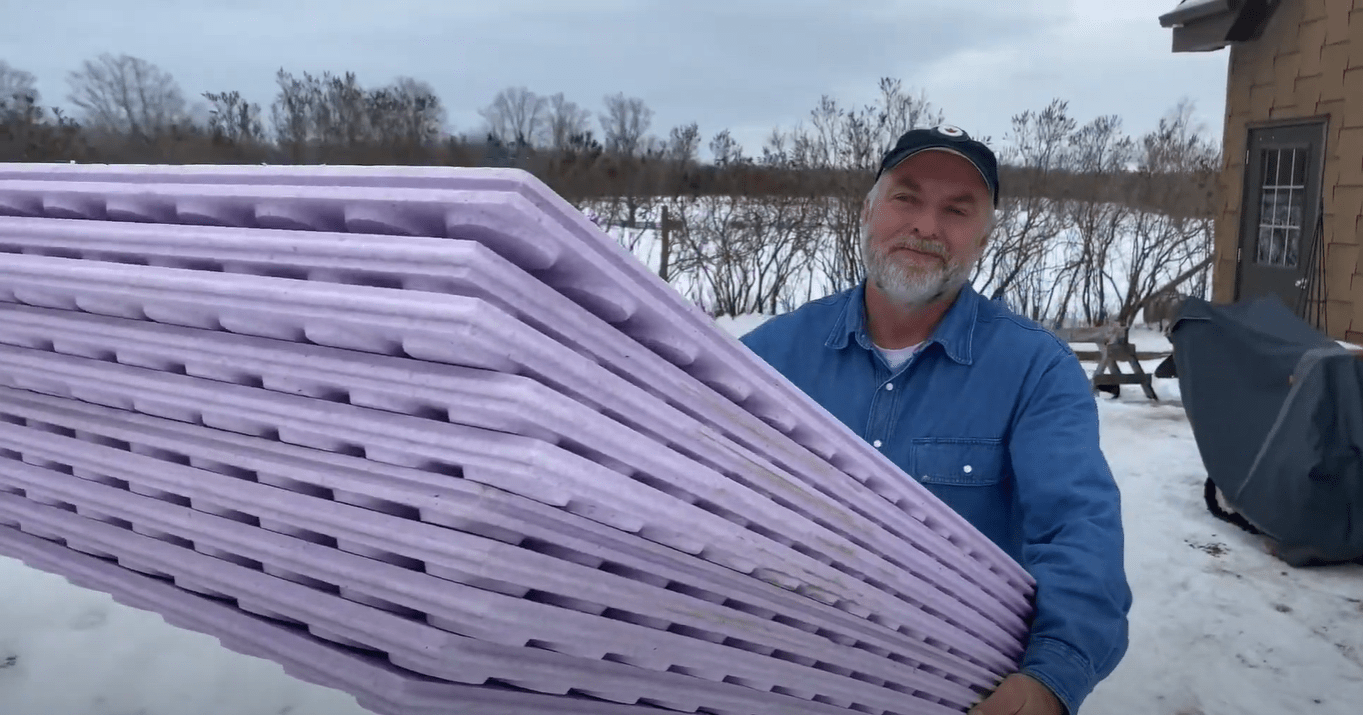 I’m always looking for new and useful innovations to make finished basements better. DRICORE Insul-Armor all-foam subfloor panels are my latest discovery, they’re unique, and they do things that other basement subfloor options can’t match. To make sense of this innovation, you need to understand something about how effective basement subfloors work, and how they do more than just keep feet warm. In fact, foot comfort is not even their most important job.

Why Basements Are Musty

Let’s say it’s 90ºF outside with 90% relative humidity, and 70ºF in your basement with 70% relative humidity. If warm, outdoor air is allowed to work its way into your house from outside, some of it will enter into the basement where it will cool. Since the ability of air to hold moisture is proportional to air temperature, as that outdoor air cools its relative humidity rises even though the air didn’t pick up any additional moisture. Cooling temperatures always lead to the air losing its ability to hold moisture. Things get really serious if warm outdoor air is allowed to contact a concrete basement floor. This often allows the air to cool enough to trigger the appearance of small (typically microscopic) water droplets to form either on the concrete, or worse, within the fibers of carpet if it’s installed directly on concrete with no subfloor. This common dynamic of air infiltration, cooling, condensation and mold/mildew growth is common in unfinished and poorly finished basements, but it’s also one reason basement subfloors make sense.

One under-appreciated thing subfloor panels do is stop the dynamic of cooling and condensation because they keep concrete basement floors sealed under a layer that air can’t pass through. As long as indoor air is prevented from touching the concrete, cooling won’t happen and neither will condensation. Subfloor panels fit together tightly enough that they create an effective vapour barrier that prevents humid air from infiltrating down to the level of concrete and this is key.

To prevent condensation as effectively as possible, seal the edges of your subfloor panels where they meet walls. I use expanding spray foam for this. Let the foam expand and harden fully as it wants to, then use a hacksaw blade out of its frame to trim off the excess hardened foam flush with the subfloor surface.

Lightweight, superior insulation value and easier cutting/installation requirements – these are the advantages offered by the DRICORE Insul-Armor, all-foam subfloor panels that I’ve been testing, though you might be thinking of a question right now.

Foam you say? Isn’t that too soft to support the weight of people and furniture? No, actually, the foam involved is more than strong enough to support any kind of hard surface flooring laid down directly on the foam with no additional supports. There are two reasons why. First, the foam is high density, so it’s much firmer than what you might think of as “foam”. And second, the hard-surface flooring that sits on top disperses the weight over a large area. I talked to an engineer at the foam manufacturer about this and she told me the combination of high-density foam and hard flooring on top was strong enough to drive a car on with no issues. I also know this to be true because I’ve insulated many floors with foam alone under hard-surface flooring and there’s never been any issues. In fact, I’ve even installed ceramic tiles over the same kind of foam used for DRICORE Insul-Armor panels and it has worked well for years. Here’s what I’ve discovered in my tests:

Easy to Cut: Unlike traditional basement subfloor options made with wood-based tiles, all-foam DRICORE Insul-Armor cuts easily with a knife and straight edge. Slice most of the way through with your blade, then snap the panel to separate the parts. Silent cutting with no power saw and no airborne dust

Warm under foot: Since these panels are made entirely of foam, they deliver a lot of insulation value. At R 4.1, these deliver more insulation than any other purchased subfloor option I’ve seen.

Drainage passages: The raised, round feet extending down from the underside of the panels provide a gap for under-floor drainage action in the event a small water leak occurs. It’s not a huge deal, but air space underneath can allow water to make its way to a floor drain, if needed.

More than any other part of the house, basements can be made better than ever if you make use of some of the many innovations made especially to create a healthier, longer lasting and better finished basement space. Just make sure it all starts with the right kind of subfloor.